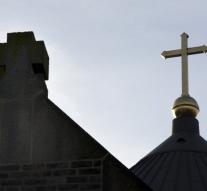 raqqah - The more than two years ago in Syria kidnapped Italian Jesuit Father Paolo Dall'Oglio according rebels still alive . The spiritual is in the hands of Islamic State (IS) , the Syrian Observatory for Human Rights reported Tuesday .

The human rights organization relies on the testimony of an apostate IS- trailer. Which has stated the father to have personally seen in a prison west of the city of Al - Tabka. Dall'Oglio was expelled in 2012 for criticizing the Syrian regime, but then had ceased in rebel territory.

In July 2013 he was abducted in the province of Ar Raqqah when he tried to mediate between radical rebel groups. Paolo Dall'Oglio was abbot of the mixed ecumenical Deir Mar Musa Monastery, about 90 kilometers north of Damascus. The Jesuit priest had lived for more than thirty years in Syria.