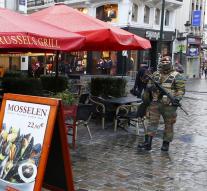 brussels - In the center of Brussels, the Radisson Blu sealed off. Heavily armed soldiers leave anyone out.

Near the hotel, near the Grand Place, a police operation was underway, Belgian media report. The Grote Markt to be cleared. Local residents should stay inside and stay away from the windows. In the Belgian capital is currently subject to the highest level of terror threat. In Mali, Friday was a terrorist attack on a hotel of the Radisson chain. A soldier just told our # c4news Producer " no one outside there is a real threat or attack ".... pic. twitter. com / DE2zBbRQ2P- Stuart Webb (@ Worldwidewebb1) November 22, 2015
NEW