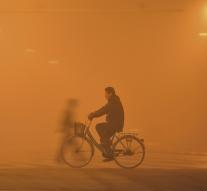 - While Paris prepares for the climate summit, Beijing still has to deal with heavy smog. Meanwhile issued in the Chinese capital code orange, the second highest level of alert.

A number of roads are closed and construction projects have been halted. The next three days are expected little change in the situation due to lack of wind.

For the 22.5 million population Smog can cause breathing problems, worsening of heart and lung diseases and heart patients and the elderly to premature death. Residents are advised outside minimal effort. The sick, the elderly and children to remain inside the best.

Heavy smog in Beijing and other Chinese cities mainly a winter problem, as there are many coal-fired stoves. Nor is the weather at this moment there is no wind for days.