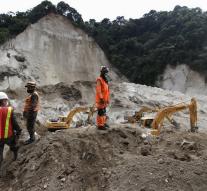 - The number of people killed by landslides in Guatemala has risen to 271. That have announced the emergency Saturday .

Guatemala was rocked ten days ago by landslides. An entire neighborhood in Santa Catarina Pinula , not far from the capital, Guatemala City , was wiped out . More than 350 people are probably still under the rubble. Monday will be decided whether the crash site is a cemetery.