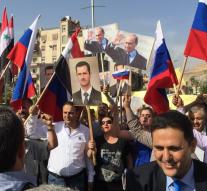 damascus - On the grounds of the Russian Embassy in Syria Tuesday detonated two grenades. A spokesman for the diplomatic mission in Damascus thus became one injured.

At the time of the explosions were gathered at the embassy advocates of bombing by Russia in Syria for a demonstration. It is not clear who has fired grenades.

Russia leads in Syria air strikes on Islamic State (IS), but it also bombed positions of rebels fighting against President Bashar al-Assad.