Home / World / Good communication Russia and US over Syria 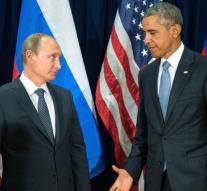 - High-ranking officers of the United States and Russia have talked Saturday about a half hour on the air strikes against targets Islamic State (IS) in Syria . A spokesman for the Pentagon was a professional conversation . The US and Russia will not join forces against IS , but both bombing in Syria .

The discussions have focused on how we can set specific safety procedures , according to the US Department of Defense. Progress has been made and the US have agreed to further consult with the Russians in the foreseeable future . Both the US and Russia fights against IS . The Russians would thereby also opponents of the government of President Bashar al-Assad attacks, which are properly supported by the West .