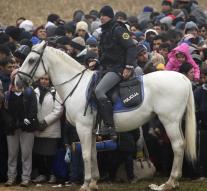 - Germany sends this week five policemen to Slovenia to assist in curbing the flow of refugees. This is a spokeswoman for the German Interior Ministry said Tuesday.

Sunday there was a crisis meeting in Brussels from eleven European countries, including Germany and the Netherlands about the refugees. Participants Slovenia promised within a week to send four hundred agents to assist in guarding the border and absorbing immigrants. Netherlands is in principle prepared " an additional contribution " to provide border control in Slovenia, said Minister Klaas Dijkhoff in Brussels.

Slovenia is on the route of migrants from Greece to the north and northwest of Europe want, especially since Hungary two weeks ago the Croatian border, including with fences afgrendelde.