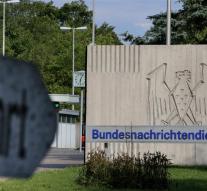 - The German intelligence service BND shows fanatical fellow EU countries to have spied on than was known until now. According to German media used the service , who worked with the US NSA , not as it was assumed only the search terms entered by the Americans in order to gather information.

The German espionage service inserts itself at least a thousand words on the list, according to the Mitteldeutsche Zeitung Wednesday according to sources within the German parliament. Wednesday was a secret session of an audit committee of the German Parliament where the head of the BND, Gerhard Schindler, was there.

The NSA and BND ( Bundesnachrichtendienst ) spied including the French government, the European Commission and defense companies. The German aid to the Americans earlier this year caused a stir in German politics.