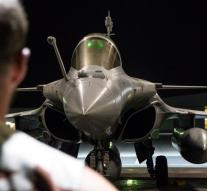 - At least six French jihadists were recently killed in air strikes carried out by French warplanes in the Middle East. The French media reported Monday on the authority of sources in government circles.

Monday visiting French Prime Minister Manuel Valls a military base in Jordan where French aircraft are stationed. Valls said Sunday that attacks French fighters of the Islamic State (IS) may take. We bombard people wishing to carry out attacks in France, whatever their nationality. Anyone who joins the them must know that he can be a target.

In the night from Thursday to Friday French aircraft conducted air strikes for the second time in Syria in the context of the international coalition against IS.