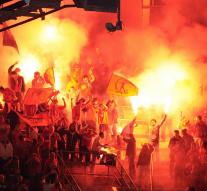 - WARNING SHOCKING PHOTO A 32 -year-old supporter of Hapoel Tel Aviv had after a confrontation with supporters of Beitar Jerusalem with an ax in his head to the emergency room .

Two hooligans of Beitar Jerusalem , known to the police , have been arrested for attempted manslaughter . The Minister of Culture and Sport has condemned the attack. She says hard to want to act against voetbalhooligans. Het violent incident took place Saturday night after the game, but today the picture came out on Twitter. The victim was seriously injured and is still in hospital.