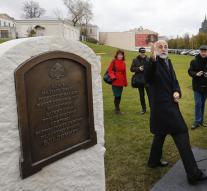 moscow - After months of wrangling over a monument to the medieval prince Vladimir (960-1015), the Russian state and the Orthodox Church in Moscow laid the first stone. The statue is a symbol of unity of Russian history, said Minister of Culture Vladimir Medinski Tuesday during a ceremony.

The Russian Orthodox Patriarch Kirill blessed the cornerstone and paid tribute to the saint as " founder of a new civilization." In 988 prince Vladimir had its realm, which serves as a precursor of modern Russia, baptized on the Crimean peninsula on the Black Sea.

The twelve meter high statue gets a place of honor in the sight of the red walls of the Kremlin on Borowizki square and should be ready in the spring. After the first plan would monument Wednesday should have been completed. But due to a dispute over the location the project was delayed. In addition, the location is controversial because the Kremlin on the World Heritage List of UNESCO. Voted more than 230 000 people in Moscow about the current location.