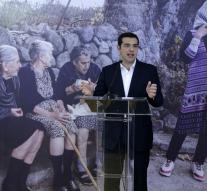 athens - The redistribution of refugees from Greece to Western Europe has begun. A first group of thirty people flew Wednesday with a commercial flight from Athens to Brussels. From Brussels they travel on to Luxembourg, where they are recorded, the government reported in Athens.

The group of asylum seekers consists of four families from Syria and two from Iraq. At the small ceremony at the airport of Athens were the Greek Prime Minister Alexis Tsipras, the President of the European Parliament Martin Schulz, the Commissioner responsible for migration Dimitris Avramopoulos and Luxembourg Foreign Minister Jean Asselborn present.