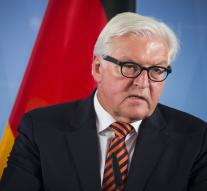 - The German minister Frank-Walter Steinmeier of Foreign Affairs has again confident that the civil war in Syria can be solved. " For the first time in years, there is reason to hope that the people in Syria in a not too distant future be able to live in peace in their own country," said Steinmeier to Bild am Sonntag.

The minister was Friday at a concert in Vienna on Syria. Although the meeting has not led to major breakthroughs, according to Steinmeier put the first steps.

Ministers from seventeen countries, including Bert Koenders, Minister of Foreign Affairs, were in Vienna together. They have agreed that they will meet again in two weeks.