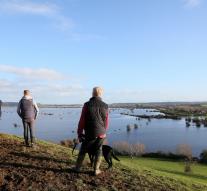 london - Authorities in Britain fear new flooding by heavy rains in the northwest of the country. The national weather agency for Lancashire County issued a code red as rivers burst their banks act threatening.

The county along with Cumbria earlier this month hit by flooding caused by a storm. The consequences are still visible. Some places in Cumbria recent weeks flooded three times.

The residents of the two counties are not called upon to leave but must adhere well prepared to quickly find a safe haven.