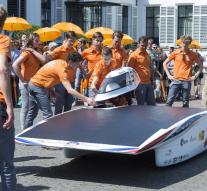 sydney - The Nuon Solar Team of Delft University of Technology and Solar Team Twente last week are respectively number one and two were in the World Solar Challenge in Sydney presented their solar cars Nuna8 and Red One. Dutch Consulate General in Sydney invited the teams to their solar cars in the city's business district to promote the innovative character of the Netherlands.

Wouter Feil of the winning team from Delft find the " really bold to show after the silence of the Australian outback, the solar cars to thousands of people in the heart of Sydney. "

The Solar Challenge is a prestigious competition of solar cars. The participants have approximately 3,000 kilometers through the Australian desert drive from Darwin in the north to Adelaide in the south.