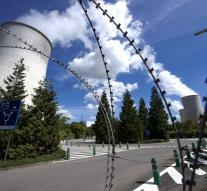 goal - The Belgian reactor Doel 3 in the night from Sunday to Monday again switched on the power grid, reports operator Electrabel. This means that all so-called 'crack stations' operational again.

Doel 3 and Tihange 2 were the first time shut down in the summer of 2012 when, during a maintenance shutdown at the steel walls of the reactor vessels thousands error indications were discovered. It was hydrogen bubbles, the thickness of a cigarette paper. In May 2013, Electrabel received permission for the restart, provided by additional research.

From this study, there were two unexpected results when the test forward and the two nuclear plants were again halted in March 2014. Midway through November, the Federal Agency for Nuclear Control (FANC) once the green light for the restart, because the investigation revealed no elements emerged that would stand in the way of a restart.