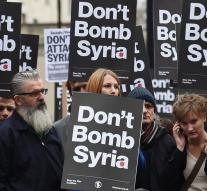 london - Thousands of people Saturday in London and in Spanish cities demonstrated against air strikes against Islamic State (ISIS) in Syria.

The British Parliament may decide next week whether or country airstrikes over Iraq spreads to Syria. It is likely that a majority of MEPs agree with the government plans. For the seat of government in Downing Street called the demonstrators Saturday slogans like "We do not want war " and " David Cameron, shame on you." In other British cities were smaller demonstrations.

In Spain, thousands of demonstrators took to the streets in protest against the US bombing, France and other countries in Syria. They gathered in more than twenty cities across the country, including Madrid, Barcelona and Seville.

The protest was initiated by the movement No and nuestro nombre (Not in our name), which more than 30 000 signatures collected against military action by the international alliance against ISIS in recent weeks. According to the group also die by the air strikes innocent people. Then the spiral of violence is unstoppable, they claim.