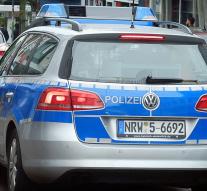 - A 45 -year-old man Thursday in a Turkish grocery store in the German city of Osnabrück shot. The perpetrator came forward shortly thereafter with a lawyer and a firearm at the police, according to German media .

The victim do with his wife shopping in the supermarket on a busy street in the center of Osnabrück. Witnesses heard several shots . The man died on the spot. The incident occurred around 10:30 hours. The shooting backgrounds are still unclear.