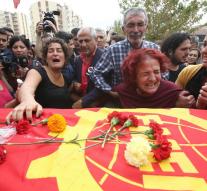 - Who were behind the bloody suicide bombings on Saturday in Ankara, Wednesday not become clearer with statements by Prime Minister Ahmet Davutoglu . The Turkish prime minister said the perpetrators had links with Islamic State (IS) or with the extremist PKK ( Kurdistan Workers Party) . According to Davutoglu are suspects in the case have been for months in Syria . He also said that left-wing extremists and the PKK suicide bombers training in northern Iraq in order to send them to Turkey.

At first it seemed a foregone conclusion with the identification of the two perpetrators.

They blew themselves during a demonstration on Saturday and drove about a hundred people in death. One of the perpetrators was identified by Turkish media as a fanatical supporter of IS . His brother committed in July, a suicide bombing in Suruç , which was also attributed to IS .