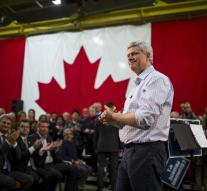 ottawa - Around 26.4 million Canadians can Monday at the parliamentary voting. Canadian Prime Minister Stephen Harper, who has been in power since the spring of 2006 , going for a fourth mandate for his Conservative Party. He will compete against Thomas Mulcair , leader of the leftist NDP , Justin Trudeau and the Canadian Liberals.

Harper is under pressure in Canada as a result of the shrinking economy. Opposition parties believe that the Conservative Party of Prime Minister is investing too little to pull the economy out of the doldrums. Harper is right for large investments. Which according to him would increase the chances that the country went into a deep crisis. The Canadian economy has suffered from the drop in oil prices.

Oil is one of the main export products of the country. In May, gross domestic product fell for the fifth time in a row. Still, Harper does not think he needs to clean up the political field. He holds pumping his policy not rush money into the economy. Besides the economy has also dominates the refugee crisis the public debate and thus the election campaign in Canada. The picture of the drowned Syrian Kurdish vluchtelingetje Alan threw the campaign on its head. Prime Minister Harper stood before his strict refugee policy is already under increasing pressure from the opposition.

The prime minister had in January the admission of 10 000 Syrian refugees promised in three years, but until now there are only a thousand in the country. The family of the killed boy had Canada as their final destination, the country already lived an aunt. The core of the electorate of the Conservatives will not be deterred by Harper's hard line on this issue. " It is mainly the voters who waver between the conservatives and the liberals, and there are quite a few ", according to political scientist Melanee Thomas of the University of Calgary.

According to polls in the last week before the elections go Trudeau Liberals leading with 36 percent of the vote, followed by the Conservatives with 29 percent and the NDP with 24 per cent.

In the important district Ontario, where to win a lot of votes, Trudeau is even 45 percent of the vote, the Conservatives on 33 percent and the New Democrats at 18 percent.