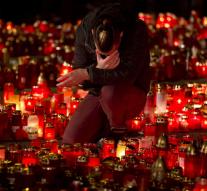 bucharest - Eight days after the devastating fire in a nightclub in Bucharest increased the death toll to 39. The disaster prompted massive street protests, which resulted in the resignation of Prime Minister Victor Ponta. Many Romanians corruption and thus lead the government as responsible for the event.

Seven visitors to the club Saturday succumbed to their injuries. Two patients deceased shortly after their arrival in the Netherlands, where they were flown from Bucharest to go for further treatment. One of these victims was an Italian national. The others died in Bucharest.

In total, were Saturday still 107 wounded in hospitals in Bucharest, of whom 48 are in critical condition. Because there are not enough special beds for burn victims in Romania, eight patients Saturday were taken to Rotterdam and Brussels.

The fire broke out during the occurrence of a rock band, where fireworks were chipped. The three owners of the club sit on suspicion of negligent homicide in custody.

Saturday 's anti-corruption prosecutors said that the mayor of the district where Colectiv club is located, taken into custody. He was in the aftermath of the protests already resigned. They said there is evidence that the mayor had issued a work permit for the club despite the fact that the fire had not granted authorization.