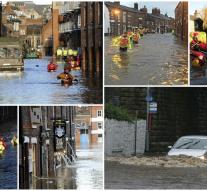 london - In the flood area in the north of England is a bridge collapsed after day-long rain. The bridge in the town of 7000 inhabitants Tadcaster in Yorkshire broke down Tuesday night and plunged into the River Wharfe.

Several homes in the area were evacuated. Many residents witnessed the collapse. The 19th century, this building was closed to traffic for several days.

At the same time prepares the area itself for heavier rainfall. Meteorologists predict that as of Tuesday again bad weather is coming, while areas in northern England the floods of recent days can hardly be over.

In parts of the county of Cumbria (North West England) Wednesday is expected to make so much rain all affected areas with more flooding can get. Also in the south west of Scotland could possibly flooded areas.