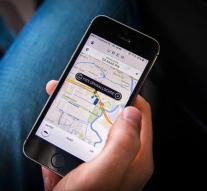 - Just before the end of the year, reports the 'controversial' Uber taxi service that has already facilitated more than one billion rides. The billionth ride took place on Christmas Eve in London in a so-called UberX car.


Uber was launched in 2010 in San Francisco and is now in 66 countries. Uber started as a taxi service where customers luxury cars were driven around. When UberX service the cars are less luxurious, but the customer will be driven around by a chauffeur with taxi permit. By the contested UberPop service anyone could play taxi driver. This service is now in many countries, including the Netherlands discontinued.
Londoner Marvin dropped on Christmas Eve at a cost of 5 pounds (about 7 euros) transport by chauffeur Ara in the north of the city. The ride Ara delivered next 5 pounds a trip on your choice in a country where Uber operates. Passenger Marvin gets Uber one year free rides gift worth 10 000 pounds (€ 13. 600).
NEW