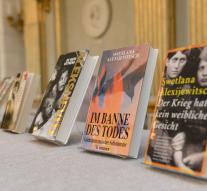 stockholm - The Belarusian writer and journalist Svetlana Alexijevitsj has won this year's Nobel Prize for Literature . She wrote among others The end of the red man , about the demise of the communist era in Russia.

The White - Russian deserves the award for her "polyphonic work , a monument to suffering and courage in our time", said the jury of the Swedish Academy, which decides the winner.