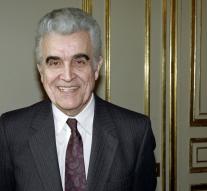 stanford - The French anthropologist and historian René Girard is deceased at the age of 91. Which was published by the Stanford University where he served as professor emeritus was attached to.

Girard, a member of the prestigious Académie Française, died Wednesday after a long illness at his home in the grounds of the University of California. The scientist was seen as one of the leading thinkers on human life. He was called the new Darwin of human science. He studied mainly in the development of conflicts and the role of imitation in human behavior.

Girard was born in 1923 in Avignon. In the late forties he moved to the United States.