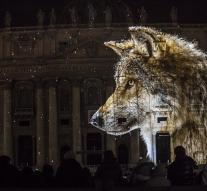 - The famous St. Peter's Basilica in Rome looks dangerously beautiful. Visitors marvel at huge projections on the basilica including a lion, tiger and wolf. It is a temporary art project to celebrate the beginning of the Holy Year in Italy.

Pope Francis has called Tuesday opened the Holy Door of St. Peter's Basilica. This is a special Holy Year of the Roman Catholic Church began that lasts until November 20, 2016. The Holy Year is in the sign of mercy and falls on the fiftieth anniversary of the closing of the Second Vatican Council. That was a turning point in the history of the reform of the Roman Catholic Church. There are the months to come millions of pilgrims in Rome expected. Normally, only a Holy Year in a year divisible by 25, but the pope can deviate from that rule. The last time that happened was in 1983, when the Church commemorates Christ on the cross 1950 years earlier had died. The festive ceremony in the Basilica drew about 50 000 faithful. Among them was Francis's predecessor, Pope Emeritus Benedict XVI. Tuesday is a Marian feast day. Preparedness Rome finds because of the special church activities in the highest state of alert. Security measures have been strengthened for fear of attacks. The moderate hotel occupancy in the Italian capital would appear that many believers from a trip to Rome refrained for fear of attacks. From Sunday to open more churches in the world their sacred doors. The Pope wants to achieve that the Holy Year can be celebrated anywhere.
NEW