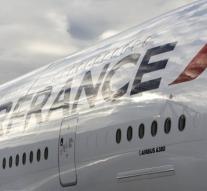 - Air France denies that after 2017 another 5,000 jobs will disappear in the French airline , as reported by the magazine Le Canard Enchaîné .

On Monday it was announced that 2900 jobs are at Air France to cut costs .

This job cuts to take place until after 2017. There are absolutely no further layoffs planned , according to Air France in a response to the message of Le Canard Enchaîné .