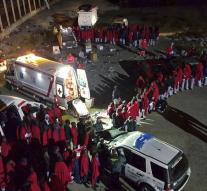 ceuta - With a mass assault on the border of the Spanish enclave of Ceuta in Morocco is the 185 Africans succeeded in this piece of Spanish territory to arrive in North Africa. Two refugees came to the action on Christmas Eve killed. According to the Spanish news agency EFE were in the rush, one of the largest in recent months, involved more than 250 Africans.

The Moroccan police arrested 104 migrants and thereby prevented that they took part in the action. The Spanish security forces indicated that the refugees were unusually violent towards the border officials on both sides of the border. Two Africans suffered serious injuries during the assault. About thirty were slightly injured.

Some of the refugees were from Moroccan territory climbed over the fences. Others swam through the sea to the border. Two of them drowned on the Moroccan side.

Spain belonging to the city in North Africa has 85 000 inhabitants and lies on the Straits of Gibraltar.