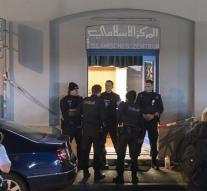 zurich - The Swiss police have found the body of the man who shot three people Monday in a mosque. The remains of the shooter were found in the area.

The man was Monday stormed the prayer center. He opened fire inside the visitors. Three people were severely wounded. The perpetrator then hit on the run. His body was found later, police confirmed Tuesday.

Police have identified the man, but that information has not yet released. What possessed him is still unknown.