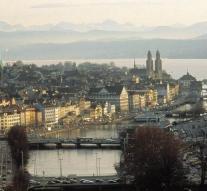 - "the Swiss city of Zurich the nearly 400,000 people can be satisfied. Their hometown adorns the top of the Sustainable Cities Index (SCI)."

"Elements are added as quality of life, environment, energy and economy, then the inhabitants of Zurich are the best off."

"Thus the inhabitants of the Indian metropolis of Kolkata are a lot worse off. Their town is on the hundredth place. In the lower regions adorn especially major cities in Asia and Africa. Cairo, Nairobi, New Delhi and Manila are to be found, for example, at the bottom."

"The SCI is an initiative of the Arcadis engineering firm in Amsterdam."