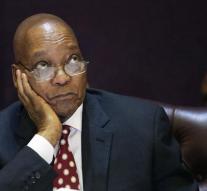 - Jacob Zuma has survived a confidence vote from his own party ANC. That means he can stay on as president of South Africa.

The executive committee of the ANC last three days in Pretoria talk about the fate of the 74-year-old Zuma. The party comes around noon with a formal announcement.

The president is since 2009 in power, he is haunted for years by a series of financial scandals that have more to do with corruption, fraud and money laundering.