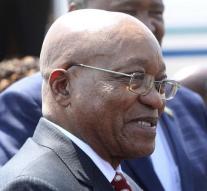 johannesburg - South African President Jacob Zuma is not afraid that he was in jail because of possible corruption scandals. He said Saturday in response to a report released Wednesday in which evidence is given for the corrupt practices within the South African government.

It was the first public appearance of the President came out since the report, the BBC reports. ' I'm not afraid of the cell. I have been in prison during the struggle, '' the president was referring to the fact that he was imprisoned for ten years during Apartheid.

The report accuses Zuma to have been influenced by Cabinet appointments by a wealthy Indian family. Zuma tried to avoid previously published the report.