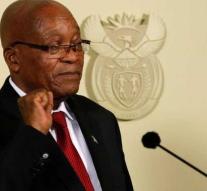 johannesburg - Jacob Zuma is the most controversial and colorful president who knew South Africa in recent history. The former anti-apartheid fighter got entangled in a series of scandals, which many other politicians would have had the head, but Zuma held it- until Wednesday- more than eight years as head of state.

His shabby background and charisma brought him great popularity among the population. This got a serious dent when the highest court in South Africa ruled that Zuma had to repay the state for a radical and expensive renovation of his own home, including the construction of an amphitheater, swimming pool and visitor center. 'He eats while we're hungry,' protesters complained.

Zuma was initially favorable to his predecessor, the distant Thabo Mbeki. 'He is a man who listens and does not act like an intellectual king', 'someone from Zuma's supporters compared the two.

Zuma was raised by his mother, a widow, and received no formal education. As a seventeen year old he joined the ANC. He had ten years in prison for conspiring to overthrow the regime and spent that time on the infamous Robben Island, alongside Nelson Mandela. He would have kept morale high by singing and performing theater pieces.

He was one of the first ANC leaders to return to South Africa in 1990 and participated in the negotiations with the white government on an end to the apartheid regime.

After he succeeded Mbeki, accusations of corruption, fraud, extortion, money laundering and tax evasion increased. He himself denies all debt. The allegations possibly explain his Zulu name: he who smiles while crushing his enemies.

The accusations go back to the nineties and involve almost eight hundred payments in a large arms deal. Zuma and other government officials would have accepted bribes for the purchase of fighter jets, patrol boats and other equipment.

The 75-year-old Zuma is a proud polygamist according to the traditions of his Zulu people. He married six times and still has four women.