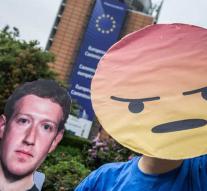 brussels - Facebook CEO Mark Zuckerberg arrived in Brussels on his private plane on Tuesday afternoon. He will be welcomed in the European Parliament around 6 pm, where the American is expected to answer questions about his company's role in the abuse of private users' data in the Cambridge Analytica scandal for about an hour.

The Facebook founder has already announced that he will apologize again. According to him, the company has taken insufficient responsibility.

Zuckerberg does not have much time. He travels to Paris shortly after the maintenance, where he has a meeting with President Macron. The maintenance in parliament with the party leaders and a single specialist will be brief. They are given only 2 minutes of speaking time. SP Euro-MP Dennis de Jong therefore speaks in advance of 'a farce'. ' We let Facebook get away from it very easily. Pity. ''