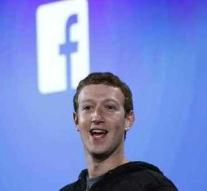 brussels - The talk between Facebook CEO Mark Zuckerberg and parliamentary leaders of the European Parliament will take place on Tuesday at 5.45 pm. The subject is the abuse of personal data from millions of users collected by the British company Cambridge Analytica to be used in election campaigns.

The maintenance is behind closed doors in the parliament in Brussels. Parliament chairman Antonio Tajani talks to the press afterwards about the discussion, let his spokesman know.

The fact that it is not a public conversation leads to much criticism from left-wing and liberal MEPs. Guy Verhofstadt, chairman of the Liberal Group, said he boycotts the meeting when it is behind closed doors.

EU Commissioner Vera Jourová (Justice and Consumer Rights) finds it 'unfortunate' that the session is not public. Tajani reacted violently to her comment. He pointed out that it was a decision of the party leaders. 'It is not your job to monitor and criticize the European Parliament,' said the Italian.