Home / World / Zimbabweans in July to the ballot box 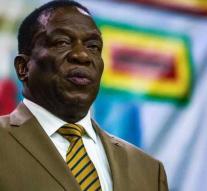 harare - Zimbabweans may go to the ballot box in July for the first presidential election since the departure of Robert Mugabe. It is the first time in decades that Mugabe's name is not on the ballot.

The new president, Emmerson Mnangagwa, said on Sunday that he was looking forward to 'peaceful and transparent' elections in July this year. The 75-year-old leader promised that the ballot box would not be accompanied by the violence that marred earlier elections. He wants to make agreements with all political parties in the country.

Mnangagwa came to power last year. His party colleague Mugabe had resigned under great pressure after the army intervened. The 94-year-old former leader still seems to be struggling with his departure. The South African broadcaster SABC published an interview last week in which Mugabe said he was the victim of a 'military coup d'état'.

Mugabe reproached Mnangagwa in the conversation illegally in power. The new president responded with a shrug of criticism. He said that Mugabe is entitled to freedom of expression, 'like every private citizen'.