Home / World / 'Zimbabwe to the polls in a few months' 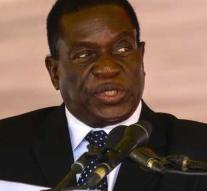 harare - In Zimbabwe there are elections in four or five months. President Emmerson Mnangagwa said this during a trip to Mozambique, reports the Herald newspaper. It must be free and fair elections, according to the leader.

Mnangagwa took over power after 93-year-old Robert Mugabe had to leave in November after a coup. The army then intervened because Mugabe had put aside his influential Vice President Mnangagwa.

As a result, First Lady Grace Mugabe suddenly seemed to have the best cards to follow up on her long-term husband. That was bad for the military.