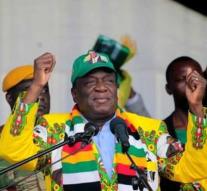 harare - Zimbabweans can go to the polls for the first national election since the departure of President Robert Mugabe this summer. His successor Emmerson Mnangagwa (75) announced on Wednesday that the presidential and parliamentary elections will take place on 30 July.

Apart from Mugabe, another well-known name of the ballots is missing this year: the experienced opposition leader Morgan Tsvangirai died of cancer in February. This happened a few months after the army forced its arch-rival Mugabe to resign. Mnangagwa promised free elections and invited foreign observers to monitor this.

The Constitutional Court ruled Wednesday that Zimbabweans do not have the right to vote from abroad. An estimated 3 million Zimbabweans live there, about one fifth of the population. Many inhabitants have left abroad since 2000 because of the poor economic conditions or human rights violations in Zimbabwe.

The Zimbabwean Lawyers for Human Rights (ZLHR) reacted disappointed to the Court's ruling. 'We really believe that all Zimbabweans now have the constitutional right to vote, whether they do it in Zimbabwe or from abroad,' said a lawyer from the Harare-based organization.

Minister Sibusiso Moyo (Foreign Affairs) told Bloomberg TV last month that the government wanted to make voting from abroad possible. He scrambled back a week later and said there was not enough time to organize it. It would be logistically impossible.