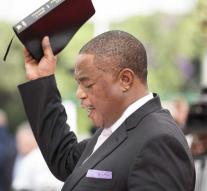 harare - The Zimbabwean government says to dismiss the thousands of nurses who had gone on strike. Vice President Constantino Chiwenga said the activists were guilty of a 'politically motivated' protest. They are replaced by retired and unemployed nurses.

The nurses laid down the work on Monday. Chiwenga said that the government had offered to put almost 14 million euros on the table to pay overdue wages. That offer would have been rejected by the trade union, which has more than 16,000 members. The protest action led to staff shortages in hospitals.

Chiwenga, a former general, stated that 'the government has decided, in the interests of patients and to save lives, to immediately dismiss all striking nurses. 'The union of the nurses is still thinking about a reaction and calling on employees to remain calm.