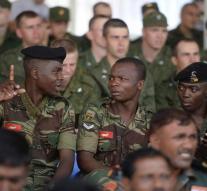 harare - Zimbabwe does not take new employees anymore, because it has no money to pay, inter alia, military and teachers. According to an official statement the struggling government of President Robert Mugabe of international finance.

The southern African country dumped its own currency in 2009 when it was hit by hyperinflation and adopted the US dollar. But now it faces a chronic shortage of dollars.

There have been a while protests against the policies of the 92-year-old Mugabe, the only leader who has ever known the independent Zimbabwe. Zimbabwe also has to deal with drought and a fall in commodity prices.