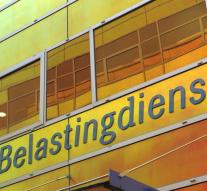 hilversum - The tax authorities have the financial and personal details of 11 million taxpayers and 2 million businesses insufficiently protected in the period from 2013 to 2016. Theft and losses can not be excluded. This is evident from confidential documents from the Tax possession of the Zembla program.

A year later, in March 2016, also concluded the Public Audit (ADR) in a report that security ' not be effected ', the program reported on.