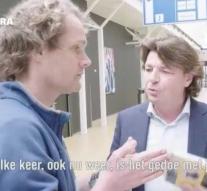 The UMC Utrecht denied Van der Ham access after he had walked into the hospital with a camera without being asked. This happened after a lecture by a terminally ill woman, Adrienne Cullen. She was the victim of a medical failure and gave the lecture together with the doctors who treated her in the time of that miss.

The journalist, unlike a number of other media, had no permission to film in the room. The moment he thought the lecture was over- there was applause- he started filming. He was then expelled from the hospital by security officers. According to the PPS, the journalist did not deliberately violate the house rules. However, he was guilty of local trespassing when he refused to leave the hospital.

Among other things, the relatively small offense and the social conflict of interest of free news gathering mean that the journalist will not be prosecuted, reports the OM.

Earlier this week, the UMC announced that the access ban that the journalist had received earlier was lifted.