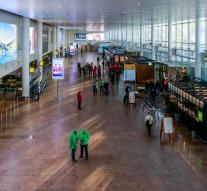 zaventem - Calculated on the day on which the attacks at the airport in Zaventem were commemorated three years ago, at the end of the morning on Friday a part of the roof of a building under construction...

The work accident occurred during work on a closed part of the airport in Zaventem. Three people were slightly injured. Nieuwsblad reports that.

The accident occurred at a closed part of Brussels Airport, where new offices are being built at the airport.

It is not yet clear what the cause of the collapse is.