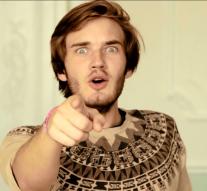 - The name Felix Kjellberg will ring a bell with many people . Under his YouTube name Pewdiepie enjoy the 25 -year-old Swede awareness . This past year he earned less than $ 12 million, which is the highest earning YouTube there .

Forbes has selected the ten YouTube channels bring in the most money. Pewdiepie earns money by giving commentary while playing games. Also giving make- up tips , joking and dancing with a violin turns out well for millions of dollars. The comedy duo Smosh ( childhood friends Ian Hecox and Anthony Padilla ) and Fine Brothers ( Benny and Rafi Fine ) are in a tie for second place with an annual income of $ 8.5 million.

In fourth place following Lindsey Stirling, the dancing violinist, who in the last twelve months, $ 6 million was credited to her bank account. The YouTube stars derive their income mainly from advertising and sponsorship contracts. In addition, a number of stars also scored lucrative contracts in the television, film and music.