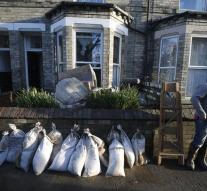 york - Tense wait for the residents of the historic city of York in the north east of England on what will happen in the coming hours. Yesterday the water subsided slightly in the River Ouse, which bisects the city. But tonight Storm Frank went ashore in Ireland. The storm was accompanied by heavy rain and strong winds. Thousands of homes were run out of power.

Around noon, Frank is expected in the area around York. The authorities predict floods again. The homeowners who have just cleaned their houses, looking with trepidation to Frank.,, It can not be that our homes are flooded again, '' said the York Mary Huntington. She has had enough of the storm. Frank is the sixth major storm this year. Hotelier John Martens is sober.,, Since 1998 floods regularly here. Which incidentally have more to do with poor water management than with global warming. '' His hotel is on an elevated site on the River Ouse. He fears the rising water is not.,, Only the cellars are likely to walk. ''
The people of York are outraged by looters. Yesterday took thieves empty houses that were temporarily inhabited by the floods.,, Absolutely horrible, '' said Kelly Emma Yare. The local police say they can not understand that people do that. They go more often patrol.