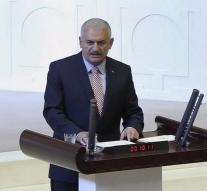 ankara - The four main parties in the Turkish parliament on Saturday in a joint statement taken from the coup attempt. Unanimity on this issue is invaluable for democracy.

Prime Minister Binali Yildirim promised the first cooperation between parliamentary groups,, gets a fresh start 'in the aftermath of the failed coup. He said to believe that the four main parties, usually deeply divided, can find common principles. Yildirim held the delegates that the people who planned the coup are not soldiers, but terrorists who had targeted the parliament.

The main opposition leader Kemal Kiliçardoglu responded with approval. The leader of the secular Republican People's Party (CHP) condemned the coup by renegade soldiers. Its failure will, according to him political parties together to try to improve democracy together.


The CHP is traditionally seen as an ally of the secular Turkish military. The army was three times over the period 1960-1980 to overthrow the government in order to guarantee the constitutional separation of church and state.