Home / World / Yet noise on the line Russia-Turkey 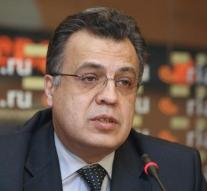 moscow - It seems all still not hunky dory between Turkey and Russia. According to Russian Ambassador to Turkey, the relationship again only be fully recovered if Moscow has received compensation for the shooting by Turkey of a Russian fighter jet.

The diplomat Andrei Karlov said to the Russian news agency Interfax. According to him, his President Vladimir Putin made the conditions clear.,, Sorry, punishment for the guilty and compensation. ''

The first condition is met. Putin accepted Wednesday apologized to Turkey.,, We are waiting for the second and third conditions, '' said Karlov.


Meanwhile, the Russian Ministry of Transport reported that preparations had begun to resume air traffic in Turkey. According to the news agency Tass was about charter flights. Ambassador Karlov reported earlier in the day, however, that tourism to Turkey until all can be recovered if the safety of Russian tourists is guaranteed.