Home / World / Yet no monastery on Schiermonnikoog 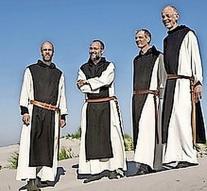 schiermonnikoog - The monks on Schiermonnikoog have withdrawn their plan for a new monastery on the island. 'From the corner of owners of recreational homes, there has been objection,' said lawyer Peter Thissen. 'They also announced that they would fight the plan to the State Council. There the monks are very frightened, so let them sail. They strive for harmony and there is no question now. '

Earlier this year presented the members of the former Cistercian Trappist monastery Sion in the Overijssel Diepenveen plans to the residents of the island. The building in Diepenveen was too large due to the decline in the number of monks.

The intention was to create a modern monastery on Schiermonnikoog in the dunes at the Westerburenweg a narrow ascending hood of fourteen meters high.

The residents initially responded moderately positively. There was some criticism, because islanders got the idea that the monks could more easily get something than the residents themselves. 'Why she did, and we did not,' it sounded. And the hood of fourteen feet high. On an island with a particularly low population density

The monastery was not applied for permission yet. That the monks wanted only when the islanders were 'mainly positive' about the plans. According to agent Thissen, the monks filed without resentment at the fact that people are against the plan. 'They are monks. That's unusual in that they say it is clearly not come into the hands of God, or the resistance was. So we go the next day cheerfully again. My inclination would be: go to the fight. They find nothing, they are patient. '

From the barber shop where the monks live now, they will hatch a new plan.

Or the same location even a possibility, the agent does not know. 'Initially they said that they abandon the site, but later I heard not. The building plan itself abandon them anyway. '

The monks themselves were unavailable yesterday.