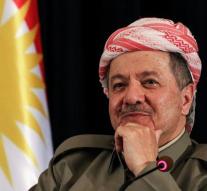 erbil - The Iraqi Kurdish leader Masoud Barzani announced on Tuesday that his countrymen voted in the referendum on independence 'yes'. The public consultation in the north of the country was held Monday against the government's intention in Baghdad.

Barzani said on TV alone that 'yes' has won and called the central government to a 'serious dialogue' instead of threatening measures against the regional Kurdish government. Iraq is fiercely opposed to secession and calling out a fully autonomous Kurdistan. Neighboring countries Turkey and Iran, where many Kurds live, do not feel anything about it.

'We'll be very hard, but eventually we'll win,' Barzani responded. He called on the world powers to respect the will of millions of people. '' The Kurdish transmitter Rudaw reported an overwhelming majority for independence, possibly even over 90 percent. The final result is expected Wednesday.