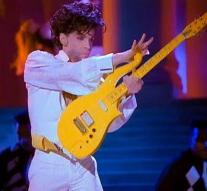 - Electric Yellow Cloud Guitar Prince has raised at an auction in the US dollar 137,500, more than 123,000 euros. The owner of the American football team Indianapolis Colts, Jim Irsay, bought the bright yellow instrument, the pop artist according to Heritage Auctions of the mid-eighties to mid nineties played.

Prince died in April at the age of 57 from an overdose in his home near Minneapolis.

Irsay already has a whole collection of musical instruments, including Jerry Garcia of the Grateful Dead, John Lennon and Ringo Starr of The Beatles and Bob Dylan.